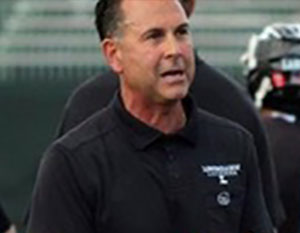 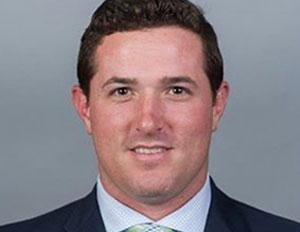 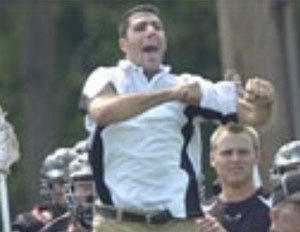 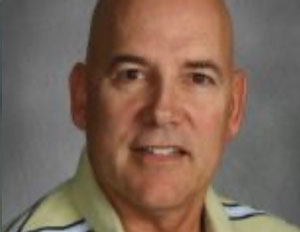 Keith Campbell was named as the new Longmeadow Boys Head Lacrosse Coach in 2015. Keith has been closely associated with LHS Lacrosse since 1973 and shares all of our great passion and pride for the history and continued development of the program. Keith is a former LHS lacrosse player Class of 1982, a graduate of UMass Amherst, Class of 1986 and a Longmeadow resident. 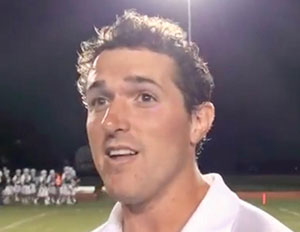 LONGMEADOW – Ryan Liebel welcomes the expectations. He loves the challenge. And despite his youth, the 25-year-old will start his new job as Longmeadow High School boys lacrosse coach with a plan.

“Hard work, discipline, mental focus,” the Longmeadow native said “To me, a team means a family, a brotherhood. I want to instill that mentality in these kids, to make these kids know a team effort is how you become successful. Winning’s always nice, but it’s the process that’s most important.”

Liebel takes over the Lancers with only one season of varsity coaching under his belt – last year at Belchertown. But Longmeadow athletic director Michael Capotosto isn’t worried about youth or inexperience. He believes Liebel’s playing career, which took him from Longmeadow to Avon Old Farms, Hobart College and the University of Massachusetts, allowed him to learn from some of New England’s most respected coaches at the sport’s highest levels.

“If you can coach, you can coach. Even though he’s young, he’s very mature. He’s going to bring a lot of energy, and he has a wealth of knowledge as far as lacrosse goes,” Capotosto said. “He had great recommendations from (highly respected coaches Ted Garber of Avon and Greg Cannella of UMass). Him being a Longmeadow guy, prep, playing at the D-I level – that’s all experience he can draw from.”

Capotosto noted the high expectations surrounding the program might have thinned the list of applicants, but he said Liebel embraces the Lancers’ winning tradition.

Liebel, who helped double Belchertown’s win total from three to six during his lone season, preached the importance of communication with his players and staff. He added he’s been blessed to have several role models to shape his leadership style and give him perspective on how to manage a team.

“We’re going to have a hard-nosed, physical, tough team,” he said. “Preparation and teamwork will be the two biggest reasons we’ll succeed.” 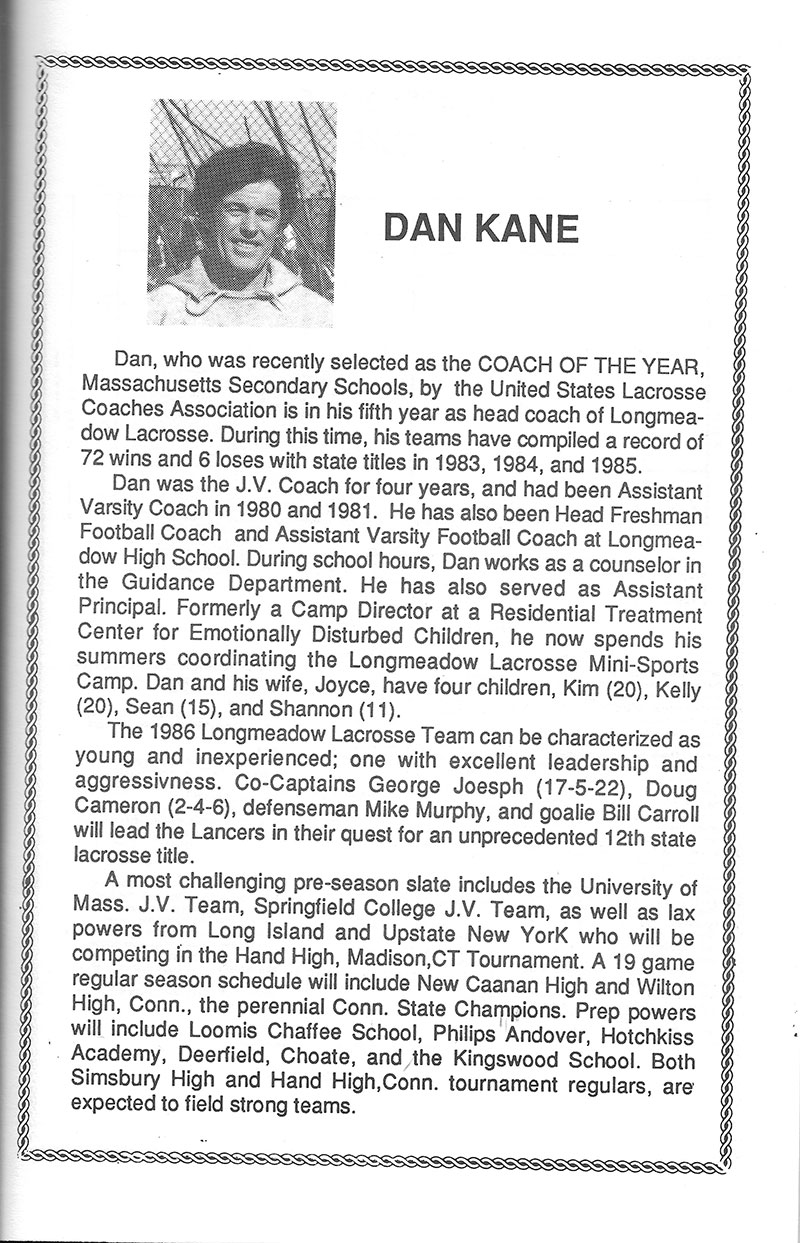 Daniel Patrick Kane, Jr. “COACH” 74, died with support from his family on June 14, 2015. This August he would have been married to his “Bride” and beloved wife, Joyce (Murphy) Kane, for 51 years. They met at his favorite place, Hampton Beach, New Hampshire. He and his wife spent 53 summers there with their children and grandchildren. He spent endless days reading on the beach, swimming, playing in the water with his children and grandchildren, and walking along the beach. He is the oldest of five children from Lowell, MA, of the late Daniel P. Kane and Evelyn (Nichols) Kane. He was raised and educated in Lowell. Dan attended Keith Academy with his late brother Joseph Kane. He pursued his education at St. Anselm’s College and completion of his masters at Florida State University. Dan was a dedicated educator. He worked as a teacher, coach, guidance counselor and vice principal at Longmeadow High School. He was especially passionate about coaching. Dan coached freshman, JV, and varsity football, but lacrosse was his legacy. From 1975-1981, he was the assistant coach to his dear friend, the late David Stockwell. They won six state titles and seven Western Mass. titles. He was the head varsity coach from 1982-1991 with 173 wins. He lead the Longmeadow Lancers to seven state titles and ten Western Mass. Championships. In June 1997 he was inducted into the National Hall of Fame for Coaching of Lacrosse. In January 2015, he was inducted into the Western MA Chapter Hall of Fame Of Lacrosse. In addition to his career at Longmeadow High School, he worked a variety of jobs during the summer. He was a camp Director at a residential Treatment Center for emotionally disturbed children in Holyoke, he established the Longmeadow lacrosse mini-summer camp, and he managed the Tides Motel in Hampton Beach. Dan’s favorite words were always to be kind and generous. This was noted by his actions in how he cared for his wife and raised his four children. Lastly, Dan was an avid golfer into the fall of 2014 with dedication from Joyce driving him to the country club unconditionally. In addition to his wife, Joyce, he is survived by his daughters Kimberly A. Arnold of Westfield; Kelly M. Kane of Greenfield; his son Sean M. Kane and his wife, Jennifer, of Southington, CT; his daughter Shannon J. DePodesta and her husband Michael of Southington, CT; his grandsons: Colin Arnold and his fiancé Morgan Andreski and Brendan Arnold of Westfield; Connor Kane and Aidan Kane of Southington, CT; his granddaughters Kayla DePodesta and Nicole DePodesta of Southington, CT. His sisters Margaret Dineen and her husband Michael of Lowell, MA, and Mary Murphy and husband Gerry of Andover, MA; sister-In law Eileen Kane of Dracut, brother-in law Leonard Francois of Springfield; cousins of Jack and Gail Arsenault of Vernon, CT; and many nieces and nephews. He was also the brother of the late Martha Thorburn and Joseph R. Kane and sister-in-law Rosemary Francois. The family would like to take this opportunity to thank the Hospice of Western and Central MA for the care and compassion during this time. Dan’s funeral will be Thursday, 9AM at the TOOMEY-O’BRIEN Funeral Home, 1043 Westfield St., W. Spfld., followed by a 10AM Liturgy of Christian Burial at Sacred Heart Church, 387 Chestnut St., Spfld. Calling hours are Wednesday 4-7PM at the funeral home. Memorial contributions in his name may be made to the Alzheimer’s Foundation of America, 322 Eighth Ave., 7th Floor, New York, NY 10001

From the 1978 Longmeadow Lacrosse Program – Handbook

“STOCKY”
To see Stocky stalking along the sidelines, and to hear the man of the legendary lungs exhorting his players, is part of the Longmeadow lacrosse scene at game time. For Dave Stockwell, Varsity Coach of the Longmeadow Lacrosse Lancers since 1975, is an enthusiastic ex-player himself who does just about everything but take the field with his team. He plots plays, shouts advice, threatens vengeance, alternately pleads and praises — all while setting his own rapid, restless pace up and down the long white line. His boys seem to love it, and have responded to non-stop Stocky’s training and teaching techniques, as well as to his sideline orchestration, by handing him three straight state titles and a record of 47 wins and three losses.

Dave Stockwell played two years as a defenseman at Governor Drummer Academy, South Byfield, Massachusetts and one year at Harvard, until an eye injury terminated his playing career. After earning his A.B. at Harvard, he added a Masters in Education from Westfield State College, and was awarded a National Science Foundation grant for work during four summers at the University of Vermont. A native of Newburyport, Massachusetts, Stocky served a two-year hitch in the U.S. Army, and spent another two years at Gulf Oil Corporation before coming to Holyoke High School in 1964, and subsequently to Longmeadow High School in 1968, to teach Math.

Longmeadow lacrosse actually started during Stocky’s first year at the high school, when he joined Varsity Coach Bill McCullough, another teacher at the school who had played and loved the game, as Assistant Coach. Together they pooled their knowledge and talents, and introduced lacrosse as a club sport, using borrowed equipment from Williams College. “Interest was high, right from the start,” says Stocky. “and we were off!” When McCullough moved on, Stocky moved up, and Longmeadow’s upstart, record-breaking teams continued to make more seasoned champions move over!

A Longmeadow resident since 1970, Dave’s hobbies include reading and tennis, but “No contest,” he states, “Lax is my first love.” Dave claims that the rest of his family, wife Dot and daughters Sharon and Diane, also “live and die” with the team during the excitement of the lacrosse months. Indeed, Dot attends most of the games and is supportive in many ways — the most obvious one being the upkeep of those good-luck yellow pants that Stocky sports for crucial games.

But whether in his triumphant trousers or his sweat suit, each new “Sticks Up!” season in Longmeadow turns Stocky into a sidelines stomper again, and a growing gallery of lacrosse watchers into faithful fans of a team that, winning or losing, knows how to play a great game well.